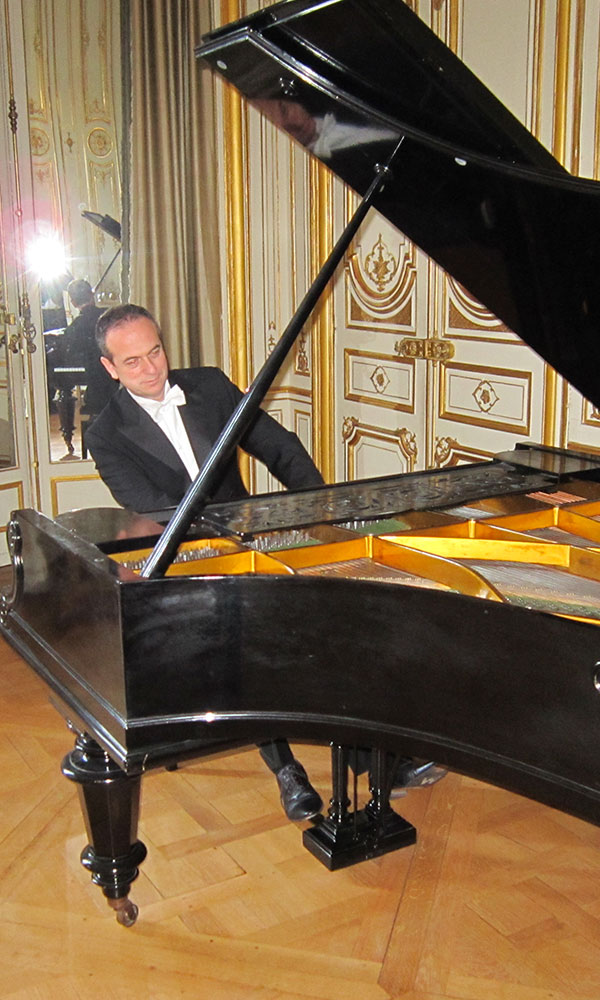 Michele Rossetti graduated with first class honours from Milan’s “G. Verdi” Conservatoire, where he studied under Maestro Piero Rattalino, before going on to specialize under Maestro Paolo Bordoni.
He has won various piano and chamber music prizes, both at national and international competitions, and has performed both solo and as a member of various chamber music ensembles, in Italy and abroad, where his work has been greeted with acclaim by the public and critics alike.
In the paper “L’Eco della Riviera”, Michele Rossetti’s performances were described as follows: “the extreme variety of his touch and his ideas, and the extraordinary vivacity of his phrasing, give his work a naturally refined nature, based on the pianist’s lively intelligence and clear personality”.
He has made recordings for the Italian State Broadcasting company RAI, and has edited the works of several lesser-known 19th century Italian composers for the “Quadrivium” record label.
As a member of a number of duos featuring Ciro Scarponi, Mario Ancillotti, Lorenzo Lucca, Guido Arbonelli and Roberto Fabbriciani, Michele Rossetti has recorded works for the Hyperprism record label.
As well as playing as a concert pianist, Michele also teaches, regularly holding specialization courses at the Norcia International Music Master ( Italy), at the Poros Summer Piano Academy (Greece), at the Tirana Music Festival (Albania), in Gubbio Summer Festival (Italy), at the Académie Musicale Internationale de Colombes (Paris) and elsewhere.
He edited the anthology “Conoscere Suonando” – a guided journey through the world of the piano – for the publishers Nuova Carisch-Warner Bros..
He is the Artistic Director of the International Piano competition “Città di Spoleto” held in Città di Spoleto (Italy) http://www.strumentiemusica.com/notizie/strumentimusica-festival-2018-i-bandi-dei-concorsi-pianistici/ and Artistic Director of the International Courses held in Foligno (Italy) http://www.umbriaclassica.com .
He is often invited to be a member of the jury at National and International Competitions.