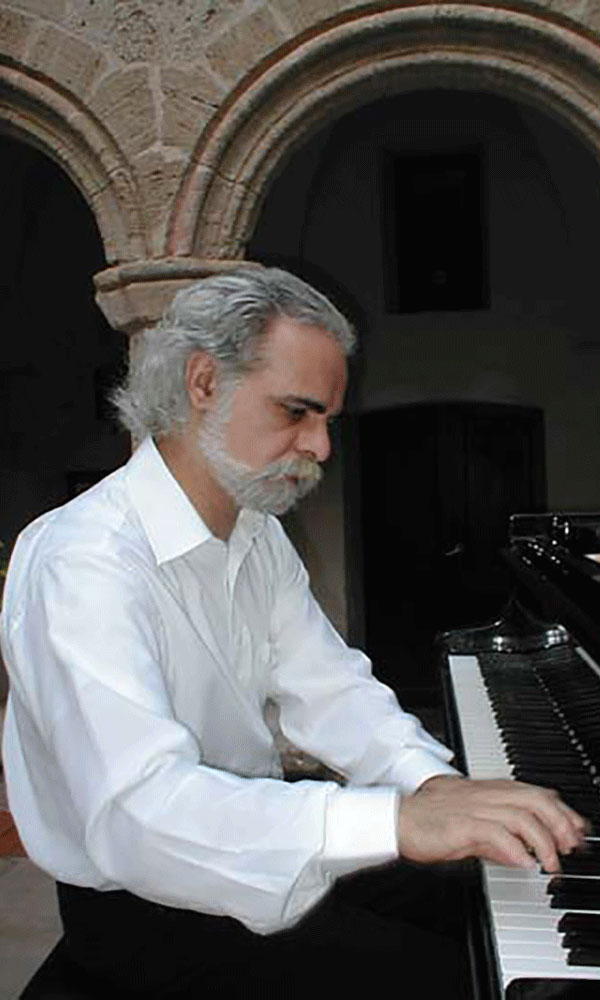 Daniel Rivera was born in 1952 in Rosario (Argentina), in a family strictly connected to the music world: his mother was an opera singer, his father Hector was a pianist and a composer (well renowned in Argentina and in the United States in the late fifties) and his aunt Alicia, was also a pianist. Together they helped him in the discover of the piano at an early age. He came to Italy in 1973 with a scholarship obtained by winning the “V. Scaramuzza” prize, organized by the National Fund for Arts and the Mozarteum Argentino. In Buenos Aires he attended a master class held by Sergio Lorenzi. After achieving the Italian Diploma with the result of 10 cum laude and a mention of honor at the “Cherubini” conservatory in Florence, he completed his studies with Alessandro Specchi in Florence and with Ludwig Hoffman in Munich. Within the next few years he participated in several international competitions like the “F. Busoni” prize, the “Dino Ciani”, the “Ettore Pozzoli” the “Rina Sala Gallo”, the “Cata Monti” (prize devoted to contemporary music), the “Beethoven” in Wien, the “Liszt- Bartok” in Budapest and the “Paloma O’Shea” in Santander. He was awarded two second places and three first absolute prizes and a vast number of special mentions. In 2002, at the “Festival di Musica dall’Europa” in Volpedo (AL), he presented, in a world premiere performance, the transcription of the “Sagra della Primavera” by Stravinsky, a transcription made by Sam Raphling that he personally revised and completed. This interesting and unique performance obtained a great success during his tours in South America and Italy. The argentinian pianist Martha Argerich invited personally for play this transcription at the prestigious Progetto Martha Argerich in Lugano in 2009. Since that time, the link with the legendary Argentine pianist, turns into an intense artistic collaboration. With Martha Argerich, Rivera comes in piano duo (two pianos and piano 4 hands) in the Teatro Ponchielli of Cremona, Teatro Lirico in Cagliari, Catanzaro’s Politeama Theatre, Teatro Nuovo Giovanni of Udine, Piano Festival of Pietrasanta and Ascoli Piceno up the memorable concert on 19 and 20 October 2012, at the Teatro El Circulo of Rosario (Argentina) which will be released four C. with live recordings, Teatro Petrarca of Arezzo etc. The critics define him “Lisztian interpreter for excellence”. He is a highly esteemed pianist and he has performed in the most important theatres in Italy and abroad, among which are the Teatro Colon in Buenos Aires, the Sala Philarmonia in Kiev, the Queen Elizabeth Hall in London, the Park Musik Hall in Dallas, the Musikvereinin Wien and many others. His natural talent and virtuosity allowed him to face any opera in the pianistic repertoire, from classics to contemporary music. His repertoire consists of more than 50 concerts for piano and orchestra, performed in tours with Italian and foreign orchestras. It is worth mentioning the 2nd concert by Bartok, the 2nd by Rachmaninoff, performed with the l’Orchestra Sinfonica Nacional of Buenos Aires, the 3rd by Rachmaninoff with the Kiev State Symphonic Orchestra, the 2nd by Prokofieff with the Filarmonica del Teatro Colon,, the 3rd by Prokofieff with the Dallas Simphony Orchestra and the 2nd by Chopin with the l’Orchestra della Radio Televisione Svizzera Italiana. He has been the first pianist in italy, after Carlo Vidusso, to have performed live the complete series of the Liszt’s Trascendental Studies (IRCO 282), that he later recorded with Irco Cosentino in Buenos Aires, in additional to other Cds with Lisztian transcriptions (IRCO 228). His memorable recordings include Beethoven’s “Hammerklaviersonate”, “Aroldo in Italia” together with Aldo Bennici (Ricordi,) as well as his live recording of Boulez’s “Premiere Sonate”. He also recorded for RAI (National Italian Television), RTSI, for Suisse Romande (absolute premiere of Sonata n.2 of Rodrigo Asturias) and for the Colonia Radio. Currently, he teaches at the “Istituto di Alta Cultura Musicale “P.Mascagni” in Livorno, where he holds a piano faculty chair and at the “Aimart Accademia Internazionale Musica e Arte” in Roma. Is now very active in teaching; frequently invited to give courses and piano master classes in Italy and abroad, as the UNR Rosario (AR), Conservatory of Udine, Parma, La Spezia, Lemmeinstitut of Leuven (BE), Holiday Musical Summer of Urbino, Festival Internazionale della Franchigena (Lucca), Festival Internazionale Duchi D’Acquaviva (Teramo) etc..